The Assembly: The Evolution of Damon Chetson 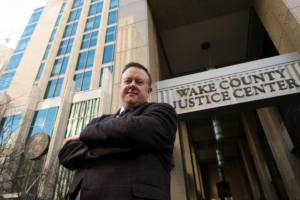 From the Raleigh, North Carolina newspaper, The Assembly:

In 1991, Damon Chetson, a University of Pennsylvania freshman and Daily Pennsylvanian staff writer, covered the murder of a Penn student that Philadelphia police pinned on 21-year-old Chester Hollman III.

Twenty-seven years later, the Conviction Integrity Unit formed by Philadelphia’s controversial new district attorney, Larry Krasner, found evidence of police and prosecutorial malfeasance and concluded that Hollman’s guilt was “near-impossible.” By 2020, Hollman had been freed and awarded a $9.8 million settlement.

As a candidate for Wake County district attorney this year, Chetson has suggested dedicating prosecutors…