UPDATE: Jaime Halscott has apparently decided to go into the IT and computer repair field, which makes sense because it couldn’t possibly be the law.

Jaime has worked his entire career to build successful software and technology companies. Most recently, Jaime was a Director at a Windows management software company, ScriptLogic, where he helped build a world class pre-sales engineering team. Prior to that, he was on the ground floor of a local software start-up, Small Wonders Software, where he brought his networking and infrastructure skills to assist in creating management software for the Windows platform.

That would be before he worked his other entire career as partner to Patrick Megaro, who has been suspended for his fleecing two intellectually disabled men of hundreds of thousands of dollars

Patrick Megaro, one of the two named partners in the Orlando, Florida law firm Halscott Megaro, PA, was suspended from the practice of law in North Carolina in 2021 after a multi-day hearing in which witnesses testified about Megaro’s years-long efforts to exploit two intellectually disabled men who had served more than 30 years in North Carolina prisons for crimes they did not commit.

Megaro swooped in after the men were exonerated but before they received their pardons, and then later attempted to represent the men in their lawsuits against various state and county law enforcement organizations for civil rights violations.  The legal contract he made to represent the two men having been ruled invalid, he and now his partner have attempted to collect money on an equitable basis.

Megaro enlisted his friend Scott “Mighty Whitey” Brettschneider, now a convicted felon, in the work Halscott Megaro claims it did on behalf of the two wrongfully convicted men.

Ultimately, Megaro and Halscott Megaro, PA, his firm, were removed from their representation of the men after the federal district judge began to suspect something was afoot and appointed one of the men a Guardian ad Litem named Raymond Tarlton. Tarlton eventually terminated Patrick Megaro’s representation, and brought in the DC-based powerhouse firm Hogan Lovells. Megaro was ordered to submit his request for payment for whatever work he did to the federal court for approval back in December 2017.

But Megaro didn’t do so.  He was later suspended from the practice of law in North Carolina, a suspension that followed his 2015 reprimand by the North Carolina State Bar.

Megaro’s suspension has now resulted in a cascade of reciprocal disciplinary actions across the country.

Any sensible attorney would run, not walk, away from Megaro.  But not Jaime Halscott, Megaro’s partner.

Young Jaime is a man with apparently no shame. Having seen his partner fleece two intellectually disabled men, been disciplined for said fleecing, and ordered to pay back $250,000 to the men, Halscott has now decided to sue the three Guardian ad Litems individually (notwithstanding the nearly foolproof immunity guaranteed to GALs) and the two intellectually disabled men.

Apparently not understanding basic issues of personal and subject matter jurisdiction, subjects taught in first-year law school, Halscott sued in Orlando, Florida state court.  The case was promptly removed to federal court and then to federal court in North Carolina. 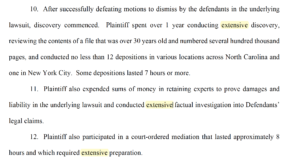 There’s this: “Plaintiff’s fears… are 100% well-founded and true.”  Like, totally, dude!  Why not a million percent!?

Dealing with Halscott sounds exhausting. But, of course, Halscott doesn’t want millions of dollars for him and his upstart firm. Perish the thought.

He wants just a couple of bucks for a law office run out of, one imagines, a strip mall. Just well-deserved payment for the “numerous” and “repeated” and “good faith” efforts made by a plucky firm of one suspended lawyer (in North Carolina) one affiliated lawyer who is a convicted federal felon and the remaining guy struggling to navigate the federal CM/ECF filing system and find local counsel in North Carolina.

I admit feeling for Halscott. When he complains about being unable to navigate CM/ECF, I think to myself: You and me, buddy. I’m right there with you: CM/ECF is the pits.

But when he whines about not being able to find local counsel because no one wants to take his stupid case, I have to say: did you ever call me? Because for $3 million upfront and a 30 percent contingency fee, I’d be willing to consider throwing away my reputation in this district to sign onto your incoherent pleadings. Just kidding, guy. Not a chance.

Meanwhile, Patrick Megaro (who is, Halscott is quick to remind you – no way, no how – the same as Halscott Megaro P.A.) is out there, writing various federal courts about how he should absolutely not be suspended or disbarred because he’s got meritorious claims on appeal before the North Carolina Supreme Court and, once he gets those transcripts ordered, justice will prevail.